Top 6 Plesk Security Extensions You Should Consider for Website Security 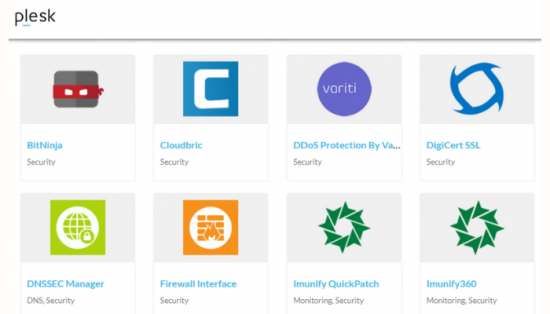 As one of the most popular hosting platforms alongside cPanel, Plesk provides a variety of security extensions for its users. Each Plesk security extension boosts their own unique features, meant to fully protect your website, server, email, and network from potential threats.

Some extensions on Plesk require advanced system administration, so it’s important that you choose the right security tools based on your knowledge and experience — as not all security extensions are created equal.

While Plesk offers a range of security tools such as malware scanners or ransomware protection software, this blog post will focus on Plesk security extensions that are available on Plesk that provide protection against web application attacks and DoS and DDoS attacks.

These types of web threats directly affect web applications and can result in your websites going offline. In this case, customers and visitors are denied access to your information and commercial services, which will negatively impact your business’s bottom line.

Take a look below at some of the most popular Plesksecurity extensions and how they can help prevent web attacks as well as their potential shortcomings. 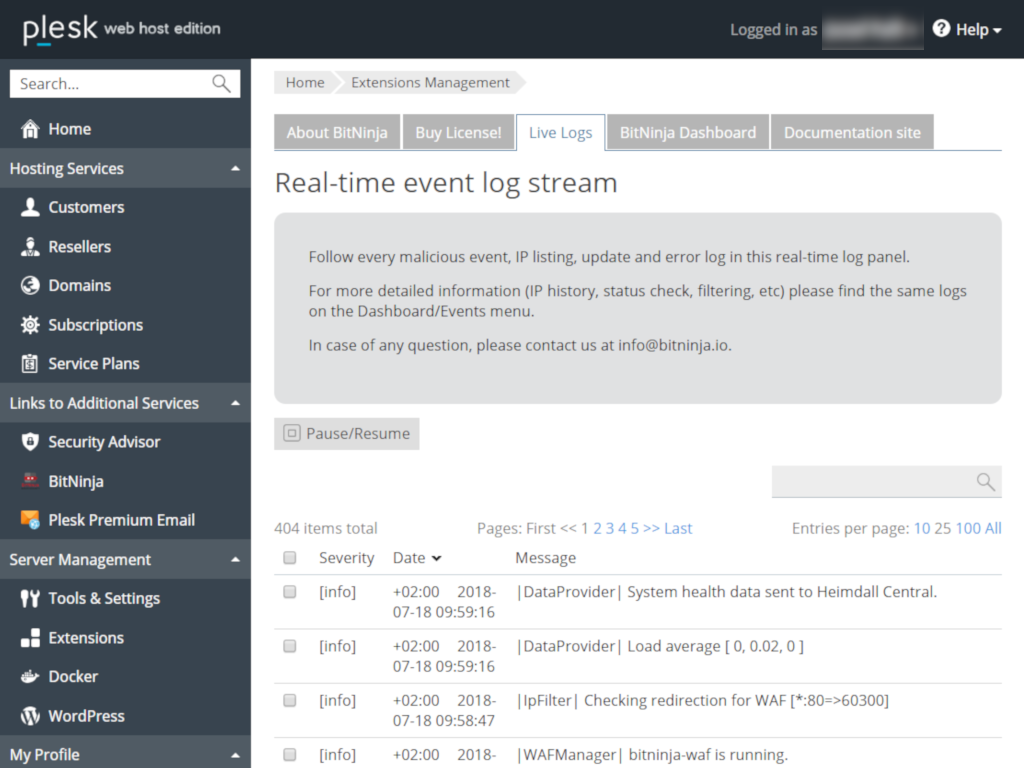 Because BitNinja’s security extension is equipped with DoS mitigation and a WAF (web application firewall), they protect against web application and DDoS attacks. Their DDoS mitigation works based on TCP based protocols, but instead of permanently blocking the IP source they “greylist” the attacker IP.

On the WAF side, they analyze incoming traffic to your server based on different factors and stops attacks against the applications running on your server. They utilize the same WAF model used by Cloudflare and Incapsula. More specifically, for their reverse proxy engine, they use Nginx, WAF engine by ModSecurity, and a ruleset from the OWASP. One downside to BitNinja is that they are unable to constantly update and finetune the WAF ruleset or implement other rulesets in real time. 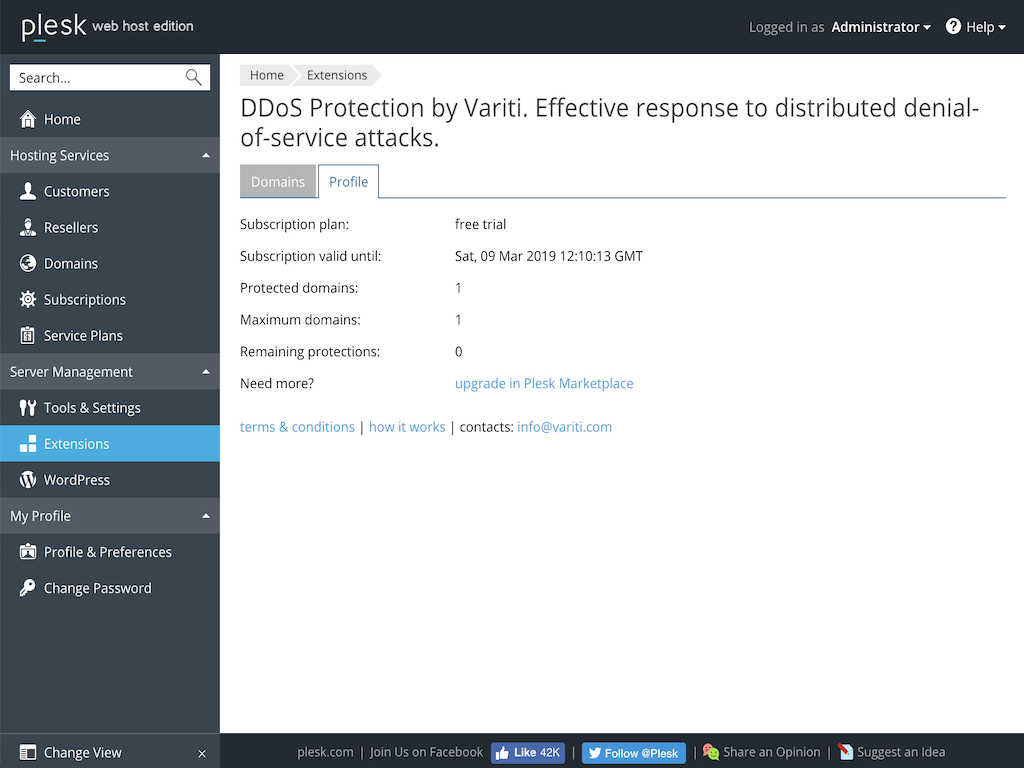 The Variti DDoS security extension focuses on protection against DoS and DDoS attacks. They do this by allowing incoming web traffic to pass through a distributed network of filtering nodes. Then, traffic is analyzed in real time and classified as either legitimate or illegitimate. Upon detection of a threat, their Active Bot Protection (ABP) technology immediately blocks this malicious traffic with a response time of less than 50 ms.

Because of this bot protection technology, Variti is able to distinguish traffic between real users and bots, including those coming from the same IP address. Thus, they can also protect against both network and application layer DDoS attacks.  Though it doesn’t offer a WAF, Variti is one of the few DDoS protection tools that are available on Plesk. 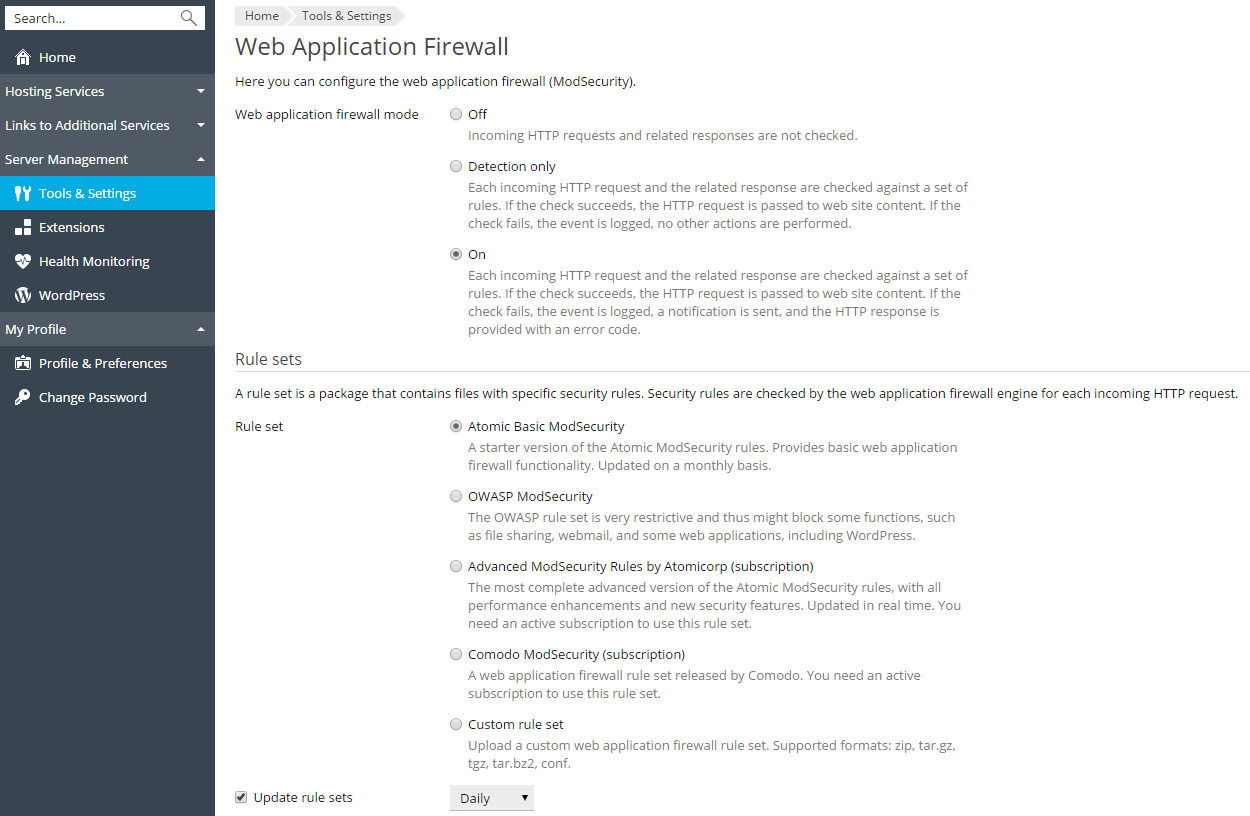 ModSecurity is arguably one of the most well-known WAFs. They support web servers such as Apache on Linux or IIS on Windows, to protect web applications from malicious attacks. ModSecurity works by checking incoming HTTP requests and based on the set of rules applied, ModSecurity either allows the HTTP request to enter the website or blocks it.

The ModSecurity security extension on Plesk offers both free and paid sets of rules. It includes regular expressions that are used for HTTP requests filtering, but you can also apply custom rulesets. This may require extensive knowledge on WAF rules by the system administrator. For example, you may need to manually switch off certain security rules so maintenance of the rulesets can be a setback for those who are looking for a more hands-off WAF.

Furthermore, there have also been cases where customers experience ModSecurity blocking legitimate requests too when too many rules are applied. 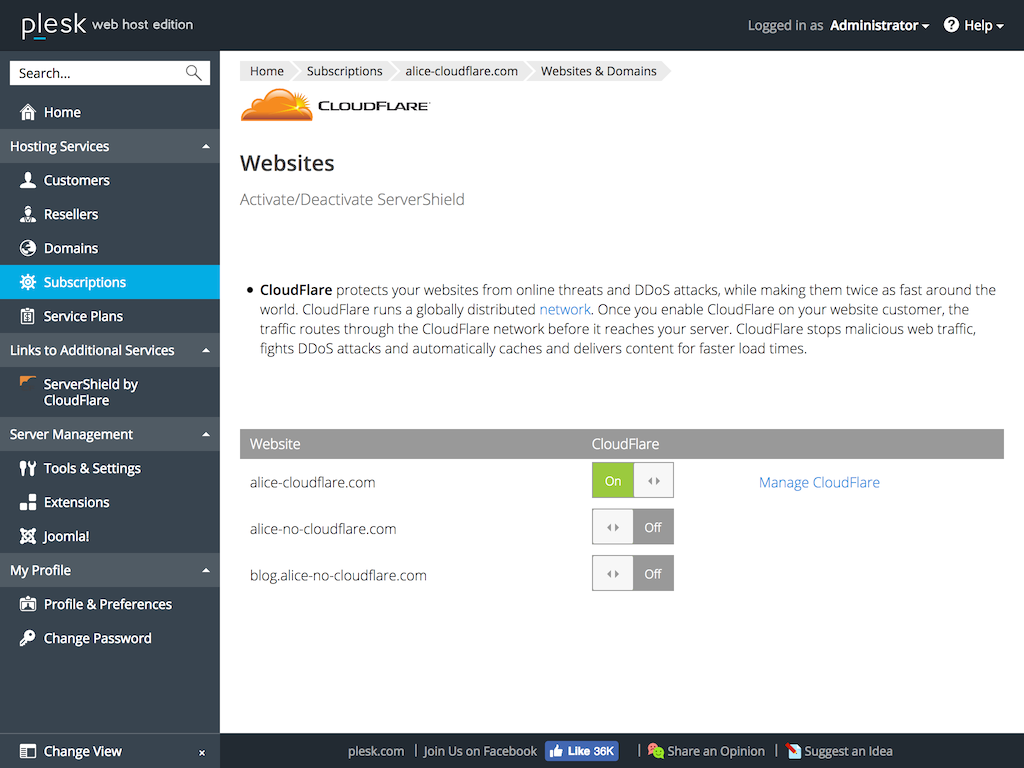 Cloudflare’s WAF option and its rulesets can only be enabled on their paid plans – more specifically the Cloudflare Servershield Advanced extension on Plesk. Cloudflare’s WAF uses the OWASP Modsecurity Core Rule Set to inspect web traffic and block illegitimate requests. These OWASP rules are supplemented by Cloudflare’s built-in rules that you can apply with the click of a button.

As part of their free plan, Cloudflare provides unlimited and unmetered mitigation of DDoS attacks, regardless of the size of an attack. 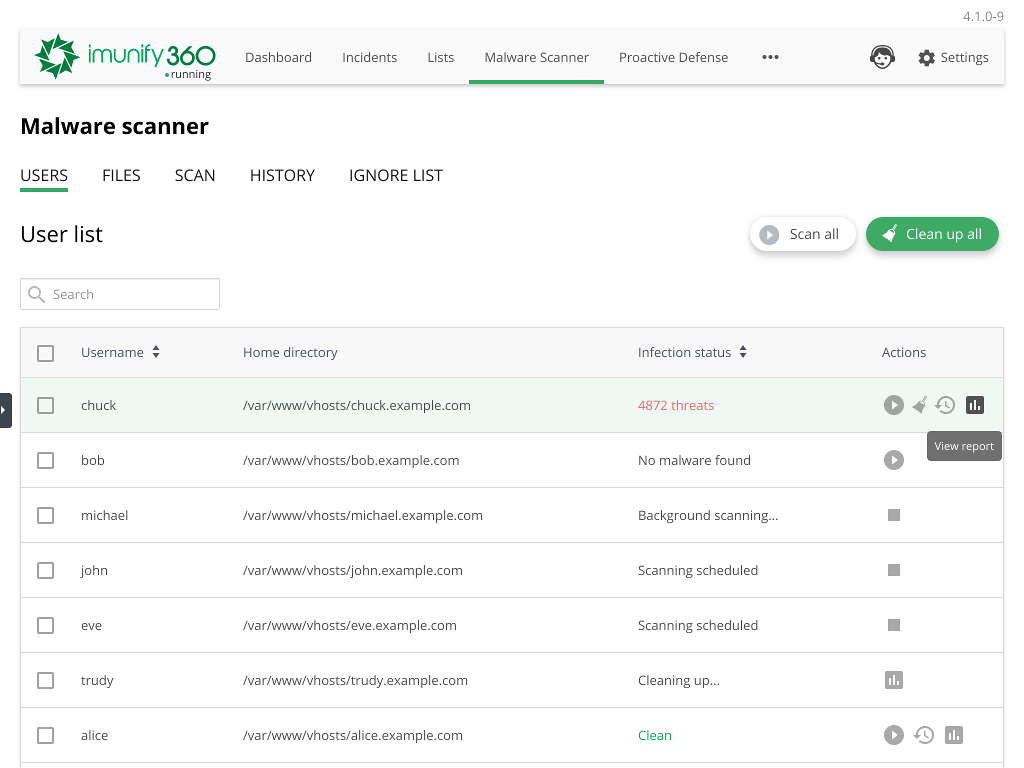 Imunify360 takes a multi-layered approach when it comes to server security. This Plesk security extension combines an advanced firewall, WAF, IDS/IPS, and more. Their advanced firewall is also powered by a machine learning engine. They take a proactive defense to preemptively stop all malware and identify potential attacks on your server.

Their WAF protects web servers from multiple threats, such as DoS attacks, port scans, and distributed brute force attacks. Their WAF also relies on ModSecurity and is automatically installed on certain versions of Imunify360. Because other third-party ModSecurity vendor’s rulesets may be installed (for example, OWASP or Comodo), these rulesets can generate a large number of false-positives and may duplicate Imunify360’s rulesets.

You will need to manually disable other third-party ModSecurity vendors on different hosting panels.

To simplify the management of website security, Cloudbric’s cloud-based WAF is integrated with the Plesk platform. The Cloudbric WAF extension also includes DDoS protection and SSL certificate renewal automation at no extra cost.

Instead of painfully blocking the customer’s IP address individually to keep DDoS attacks under control, Cloudbric blocks these huge amounts of traffic before it reaches the site. Cloudbric’s advanced DDos protection ensures your website stays up and running.

The Cloudbric WAF is designed to install and work with as little human interaction as possible. We handle the security so that customers don’t have to. Unlike ModSecurity which maintains a library of malicious patterns, known as signatures, Cloudbric takes it up a notch by also implementing signature-less detection techniques into the WAF engine.

Additionally, unlike the rules of ModSecurity that are updated once per month, Cloudbric’s WAF does not require signature updates.

If your company is dependent on online traffic for business, then protection against DDoS and web application attacks is a must.

For Plesk users, there are a variety of Plesk security extensions to choose from to make the management of security extremely easy for web managers, designers, system administrators, and other web professionals – it all depends on your security needs and whether you are looking for fully managed services or customization.

If you need assistance with Cloudbric’s Plesk extension email us at support@cloudbric.com.