What is DDoS and Why Does Your Cloud Security Software Need DDoS protection? 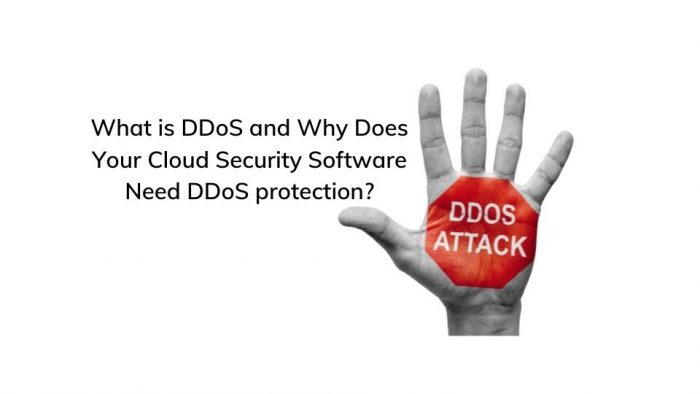 What is DDoS and Why Does Your Cloud Security Software Need DDoS protection?

As our lives have shifted to the Internet during the unprecedented COVID-19 pandemic, distributed denial-of-service (DDoS) attacks are on the rise. Specifically, ransom DDoS attacks. It was reported that ransom DDoS attacks increased 29% from 2020 to 2021. For example, in the case of a DDoS attack on food delivery service Lieferando (Germany), Not only were they only able to receive orders but not deliver orders, the cyber attackers demanded a little over USD $13,000 to stop the attack.

According to Global Workplace Analytics, it is predicted that 22% of the American workforce (36.2 million Americans) would be working remotely by 2025. This statistic shows cyberattacks will have more opportunities to attack even post-pandemic. As such, organizations need to take necessary measures to protect their businesses, and DDoS protection is not a bad place to start.

What is a DDoS Attack and How Does it Work?

A distributed denial of service (DDoS) attack is a malicious attempt to disrupt normal traffic of a network or server and ultimately make the network unavailable for users by overloading a system with a flood of internet traffic.

The attack is carried out on layer3,4 and layer7 and other IoT devices connected to the internet.  If networks are infected by malware, then the attacker can control each device on the network individually to perform a cyber-attack. When a server is targeted, each infected devices send requests to the target’s IP address to overflow the traffics on the server potentially resulting in a denial of service to normal traffic. Since each infected device is recognized as a legitimate device, it is difficult to distinguish the attack traffic from normal traffic.

A network connection on the internet comprises several different components, known as “layer”, and each layer serves a different purpose. A typical network connection has seven layers and is sometimes referred to by its layer number. The two most common types of DDoS attacks are on the application layer and network layer.

The network layer comprises technologies and protocols that make the Internet possible: it is where routing across networks takes place. This type of attack is typically executed by attacking a network’s equipment and infrastructure. Other characteristics of a layer 3 attack are that it does not require a Transmission Control Protocol (TCP) and that it targets a network’s software instead of a specific port. The TCP is usually used in conjunction with an Internet protocol (IP) to maintain the connection between the sender and the target. When the target server is under attack, large amounts of junk data usually overwhelm the target’s resources which leads to crushing the server.

The application layer refers to the human-computer interaction layer where applications can access network services. Such an attack is usually done through an HTTP flood: similar to refreshing a web browser repeatedly on many devices at once. The large number of requests flood the target’s server, resulting in denial-of-service. Since the malicious traffic is hard to differentiate from legitimate traffic, layer 7 attacks are hard to defend against.

Costs of DDoS Attacks on Businesses

The most obvious cost of a DDoS attack is to a business’s revenue. However other costs, less tangible, and potentially more damaging, are corporate reputation and repair of damaged IT infrastructure. Once the server is down, there are inevitable countless damages such as bad service experience, loss of customers and trust, and so on. Meaning, the cost of a DDoS attack doesn’t stop when the attack ends. Companies also have to identify what was attacked, repair vulnerabilities, and the rest of the network; that involves hefty overhead costs.

A recent example of this would be the AWS (Amazon Web Services) DDoS Attack in 2020. The attackers targeted an unidentified AWS customer and the attack lasted for three days. Even though the damage caused by DDoS was not as bad as it could have been, the collateral damages AWS users have is significant.

Every business operating on the cloud should strongly consider using cloud security software that includes DDoS protection in order to avoid costly attacks. By taking the extra step of using a cloud-managed security system such as Cloudbric WAF+, not only can you protect your business from DDoS attacks, but other cyberattacks as well. Cloudbric actively blocks layers 3, 4, and 7 DDoS attacks scalable up to 65Tbps. To find out what is best for your business or sign up for a free trial, click here!